The possibility to access the quantum nature of matter at the mesoscopic level has opened a new era in condensed matter physics. Its success is based on the low dimensionality reached for the charge carriers, i.e., on the strong confinement of spatial dimensions to length scales comparable to the particle’s wavelength.

Quantum dots (QDs) are nanostructures hosted in semiconductors where a few electrons can be electrostatically trapped in discrete states. Therefore, QDs allow us to access and control the quantum nature of single electrons and interactions between them. Since the first measurements of few-electron phenomena in lateral gated QDs, the focus of applications of these systems has shifted from single spintronics toward quantum information science, as originally envisioned by Loss and DiVincenzo.

My main research interests in this field are the coupling between distant spin qubits and the control over negative influences of the environment with the goal of a scalable design of useful quantum devices based on this promising qubit platform. 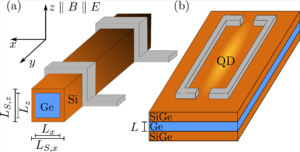 Hole-spin qubits in quasi-one-dimensional structures are a promising platform for quantum information processing because of the strong spin-orbit interaction (SOI). We present analytical results and discuss device designs that optimize the SOI in Ge semiconductors.
Read More 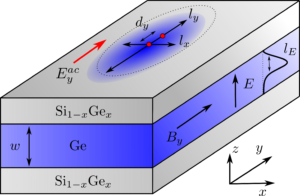