The dynamics of an isolated or closed system, meaning that it does not interchange information with any other system, is coherent and governed by a Schrödinger equation. If the whole universe were considered as a closed system, any quantum-mechanical process could be described by the Schrödinger equation with the corresponding Hamiltonian. However, treating that Hamiltonian is practically impossible. A typical example where incoherent processes come into play is a small central system interacting with a macroscopic environment, also known as open quantum system.

The impossibility to treat the quantum degrees of freedom of the macroscopic object leads to a much more efficient treatment of the problem which implies the appearance of incoherent processes in the reduced dynamics of the small central system. This is what happens in a transport setup where a central system can interchange particles with the environment, or in a lossy system dissipating energy to a phononic or photonic environment.

The concept of dissipative engineering consists in suitably engineering the continuous coupling of the central system to its environment in order to actively utilize dissipation to create and stabilize quantum coherences. In this way, dissipation turns into a driving force behind the emergence of coherent quantum phenomena, instead of being a corrupting mechanism.

Novel transport blockade mechanism in quantum dot arrays and conducting molecules based on an interplay of Coulomb repulsion and the formation of edge states.
Read More 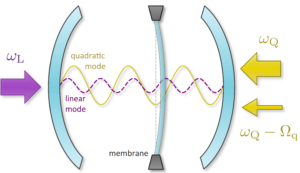 Degenerate parametric oscillation, one of the most elusive models in the field of open system dynamics, can be implemented in modern optomechanical setups.
Read More